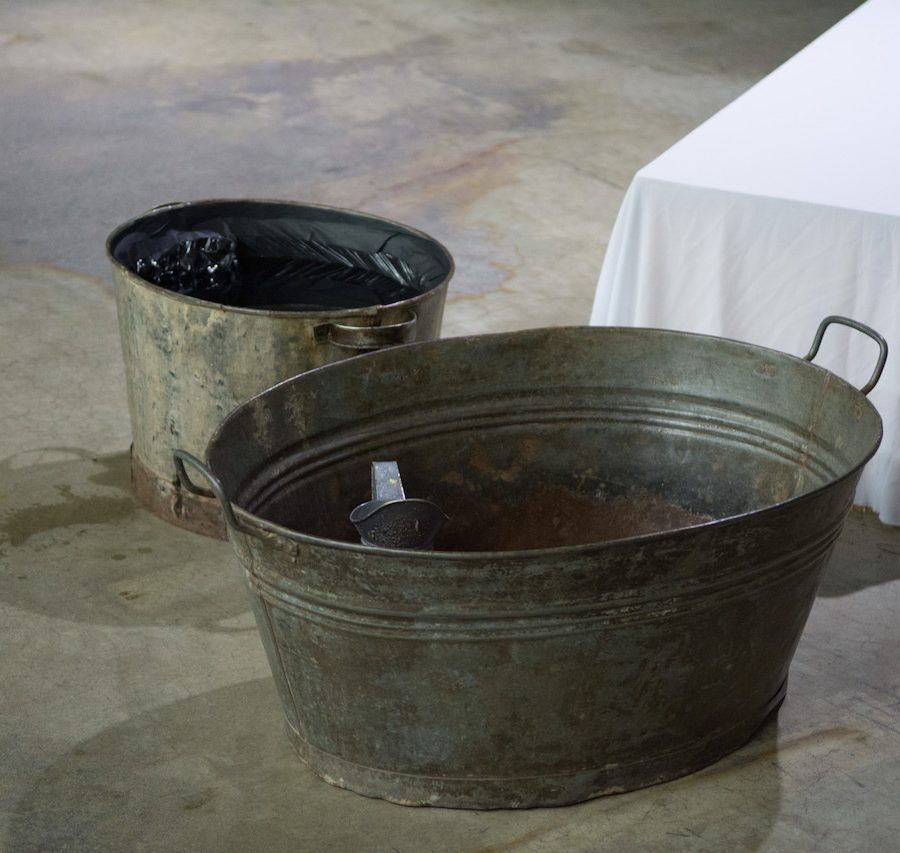 Raeda Saadeh performed Friday October 6, 2017 at VIVO Media Arts.
Out of respect at the artist’s request, no documentation was posted or streamed. Select photos, once approved by the artist, may be posted. Stay tuned.

Raeda Saadeh participated in an artist talk with Maiko Jinushi and Nile Koetting at Pat’s Pub on October 5, 2017. 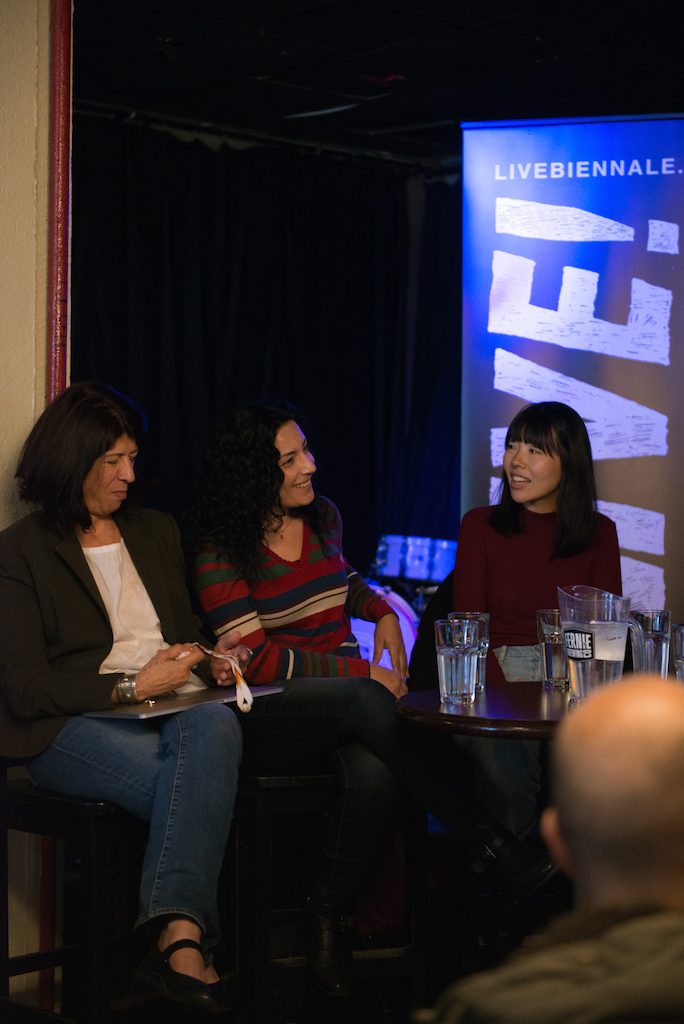 The woman as an occurring subject in my installations or performance work is represented as living in a state of occupation. This occupation or ‘occupying’ force is issued through political conditions within her environment and this results in influencing the otherwise peaceful quality of her world. There are both private and public elements that manipulate this world.

The occupying force has many facets: it can take the shape of physical tangible realities of the everyday, such as in a wall of concrete, a fence, a checkpoint, a curfew, a barrier of stone – or it can reassign it’s force unto a face of a child, a home, a language, and cultural, traditional expectations. There are limitations on her personal freedom as well: the woman, the mother, the lover, the guide, the protector. She seeks justice and longs for change. She is not blind to the opponents around her and pushes forward with enduring strength – and at times, she feels that it is almost as if she has to assume a sort of madness in her behavior so that she can live unharmed by oppression, in an attempt to always protect those she loves from negative forces of fear.

In my art works, the woman I represent lives in a world that attacks her values, her love, her spirit on a daily basis, and for this reason, she is in a state of occupation – and her world could be here in Palestine or elsewhere; and despite all, she looks towards her future with a smile.

The subject/woman I represent in the majority of my work  is weighed down with oppression but is filled with ambition; she is saner than she should be and yet she is also a little mad.  She is both fragile and strong, she is fully aware and responsive, and she is constantly on the move. And every move she makes, every act, is an act that exhibits awareness towards her surrounding environment, while simultaneously being an act of revolt towards social orders/conditions.

Raeda Sa’adeh (Palestine) was born in Um El Fahem in 1977, and received her BFA and MFA from Bezalel Academy of Arts and Design in Jerusalem. She was the winner of the first Young Artist of the Year Award organised by the A.M.Qattan Foundation in 2000. Her work in photography, performance and video has been exhibited widely internationally in Europe and the US. Recent exhibitions include ‘Re-Orientations’ at the European Parliament, Brussels; ‘No Man’s Land’, at the GEMAK Museum, The Hague, Holland; ‘In Transit’, House of World Culture, Berlin; ‘Biennal Cuvee’, OK Centre, Lens, Austria (all 2008); Infr’action Festival International d’Art Performance, Se’te, France; and ‘About Time 2’, Kunstmuseum, Denmark (2007). Her work was included in the Sydney Biennial of 2006 and the Sharjah Biennial 8, 2007. She lives and works in Jerusalem. In 2015, Al-Monitor considered her among 50 people shaping the culture of the Middle East.