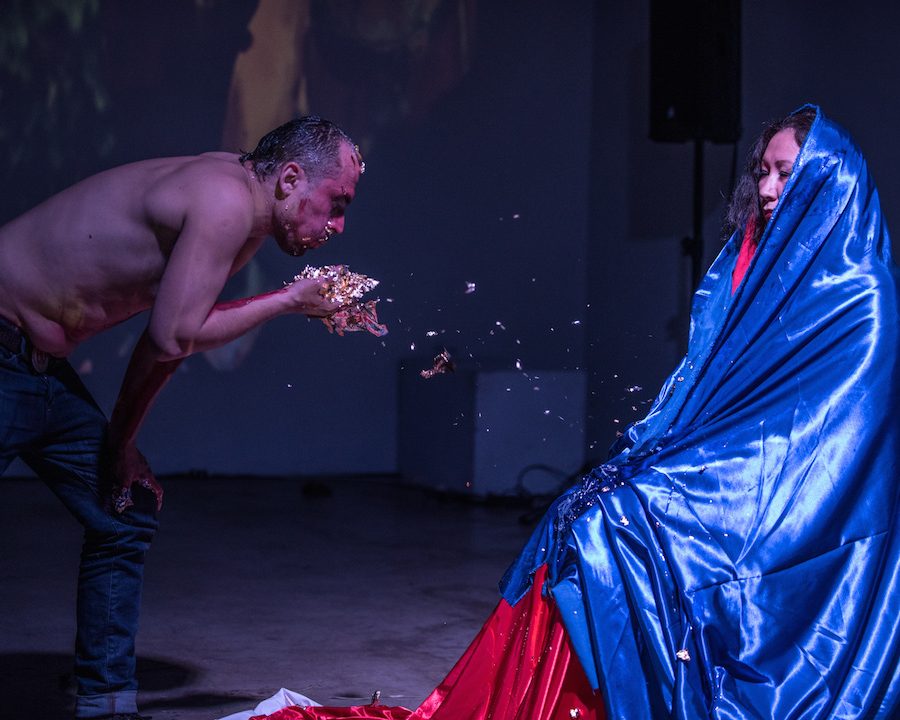 Theo Pelmus & Kristin Snowbird performed Thursday October 5, 2017 at VIVO Media Arts.
There’s lipstick stains as blood wounds creating a visceral violence.
Liquids such as milk and wine spilled down his front, and were poured over the Pieta statue, which was placed in his mouth.
Read the full review in Coming Alive: a review of 2017 LIVE Biennale Performances. 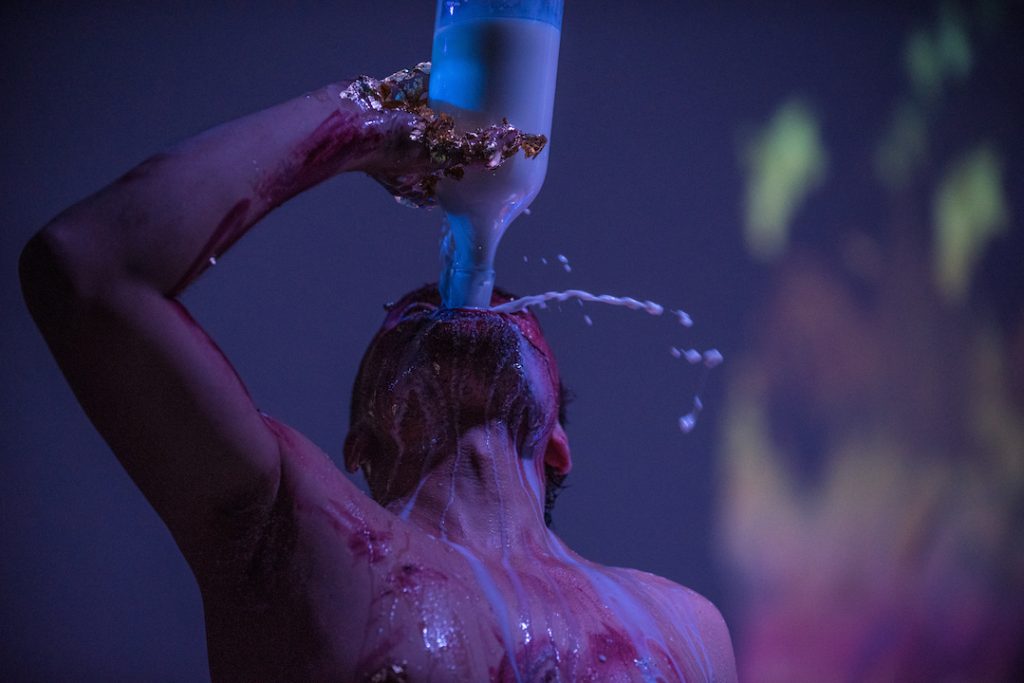 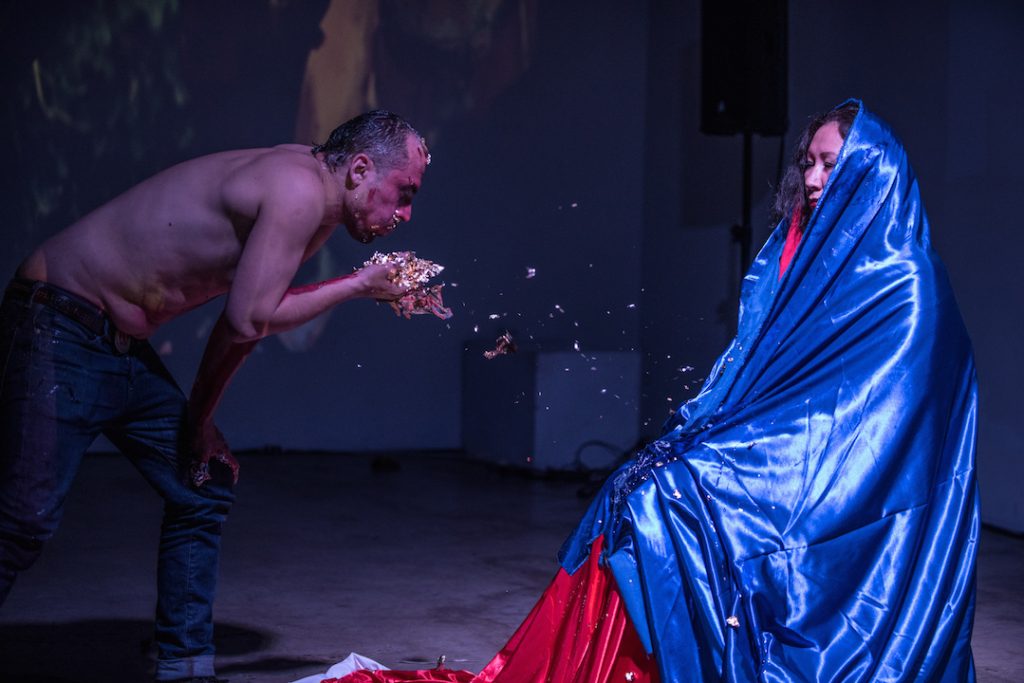 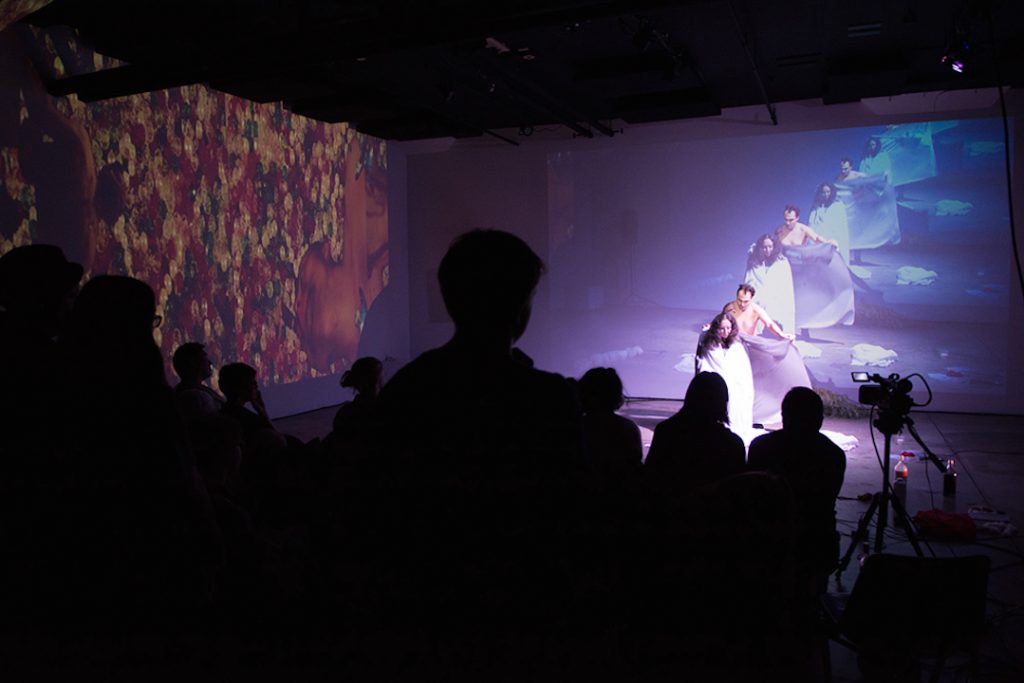 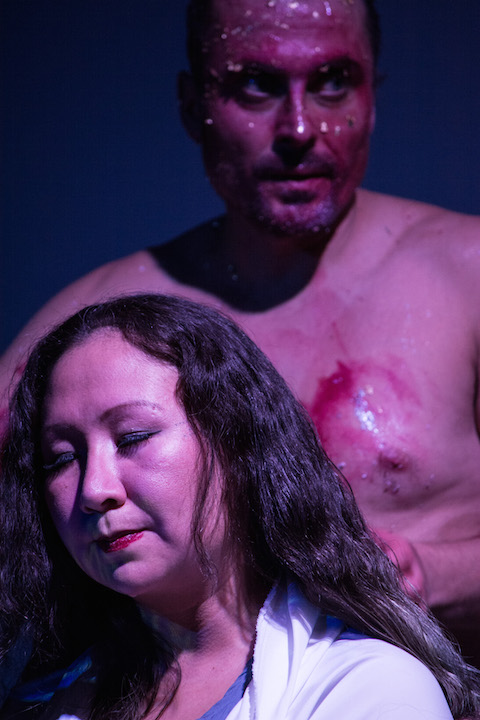 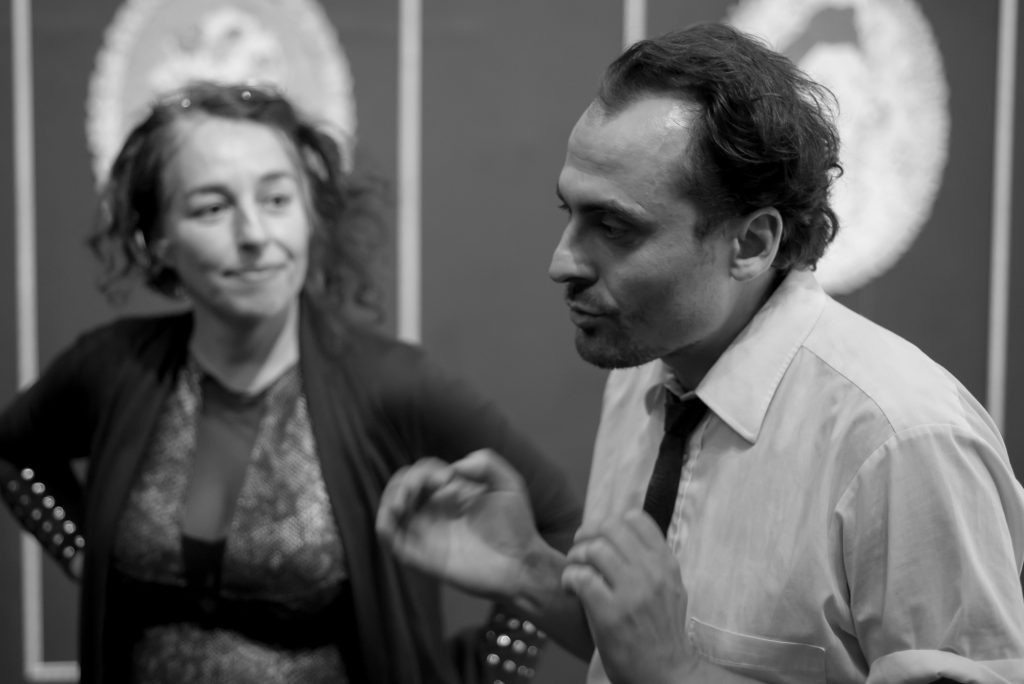 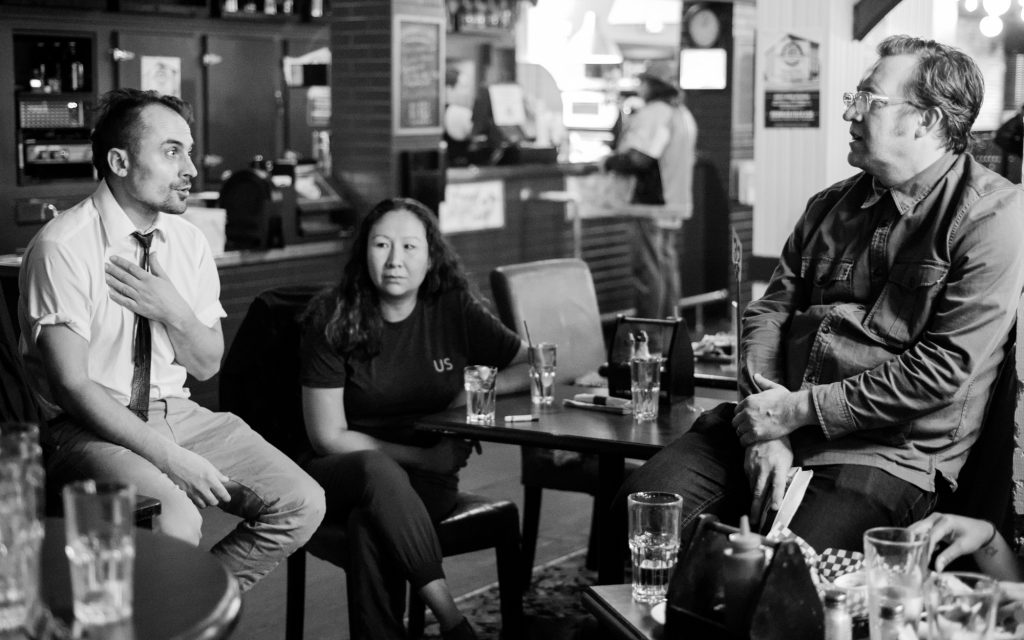 Theo Pelmus in collaboration with Kristin Snowbird as live sculpture

Still Life: Memento Mori performance will consist of the labor of creating the tableau vivant multi media installation work through the use of the objects’ shadows, overhead projections, layered digital-projection and sound. The performance will make use of obsolete technology and new technology such as wireless technology and wearable technology that controls live the multichannel video installation.  The center point of the performance will be the labor of Kris Snowbird and I to replicate Michelangelo’s Pieta as a live sculpture. My partner Kris Snowbird and I have been collaborating, performing and creating performative objects combining the two cultures that we are coming from, Romanian and Ojibway. Michelangelo’s Pieta, is an instrument of belief and morning that is recurrent in my practice. Kris will act as a live model being transformed into the stillness of the Pieta sculpture. The wardrobe of Saint Mary will be made through the labor of performance using traditional Romanian costume references and respectively Ojibway references. The live sculpture represents conceptually an inversion of the instrument of colonization and oppression that Catholicism exercised historically towards both cultures. On the other side the Pieta symbolizes the universal morning that death brings. The making of the live Pieta sculpture is a culmination of memento mori meta-narrative of this performative project.

My performance practice in essence is creating elaborate worlds through shadow play of performative objects and video-projections. Similar to a live VJ-ing using both objects, video and sound to create one single video image through performance. The narration of the performance grows in itself while the performance progresses from a messy-like realm, disorganized gesture and objects to a clean image. It is like the guts of a machinery, visceral and messy inside but what is feeding and sustaining is a clean image, a clean surface. It is a reveal of the inside; and all of this under the universal conceptual umbrella of Memento Mori, a reminder of our disappearance and mortality. And what would be the best way to represent this but only through the labor of creating a still life tableau vivant using objects, shadow play of the layered objects, video projections and sound. http://www.theopelmus.com

My process of work can be described as a continuous questioning and understanding of the way in which my tradition as a first nation woman influences the way I conceptualize art. I am interested in creating art as a way of understanding the nature of being as a first nation woman artist. One pivotal aspect of the work I am creating is the traditional labor of beading and how it can be applied to different mediums of art. I am researching these approaches though film, photography, and performance. I am interested in art as a process of making a difference in the understanding of the culture I come from, with its stories, traditions, and the historical and personal trauma. 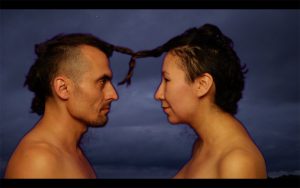 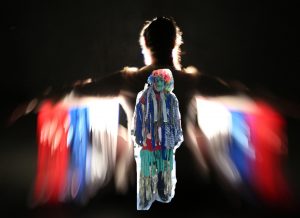