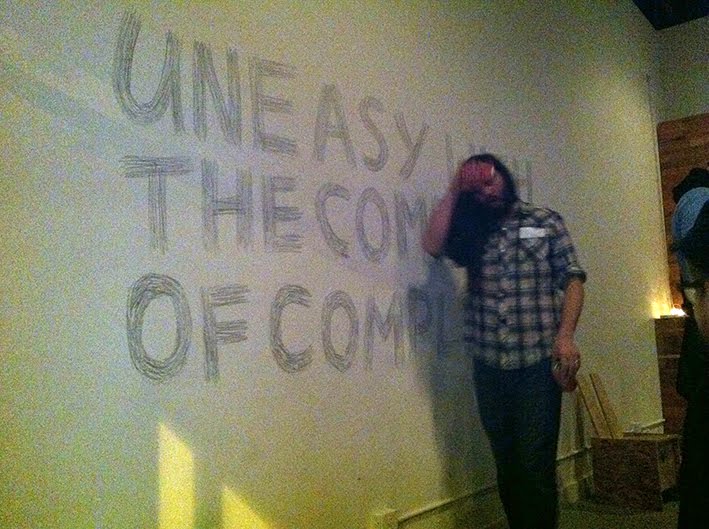 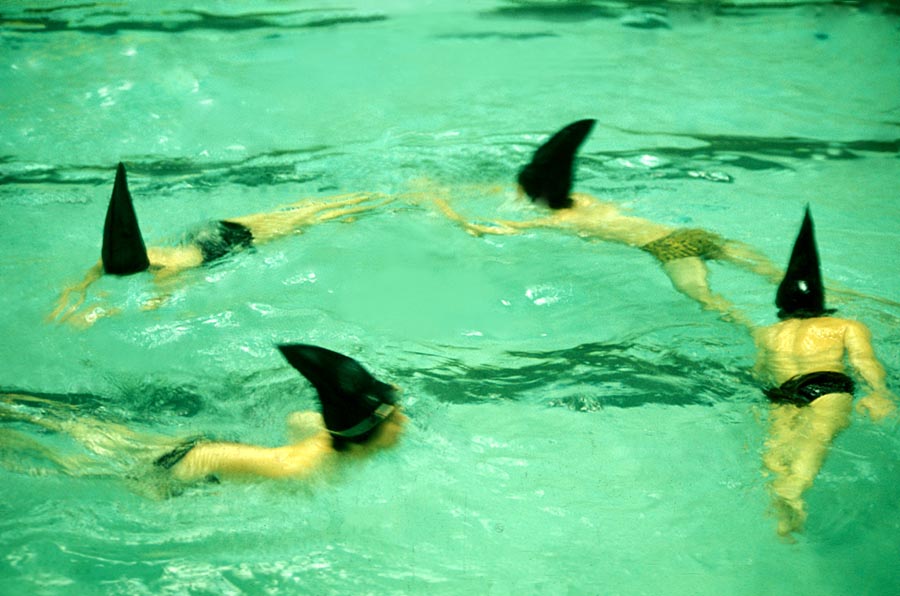 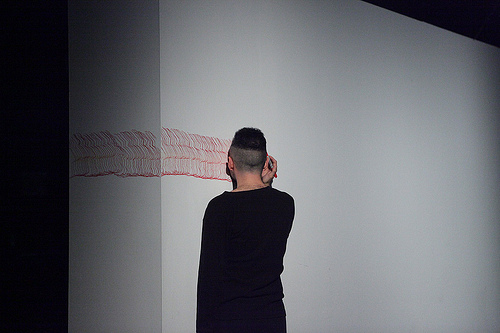 re-LIVE Vancouver was a tableau of tribute artworks at VIVO Media Arts Centre on September 25 2011. Installed like a gallery, it became an art exhibition with live art works that were scraping, rubbing, running around, wiggling and jiggling in the corners and along the walls.

Sponsored by the City of Vancouver’s 125th Anniversary Grant Program, it was a reiteration and redistribution of performative creations by some of this city’s most iconic artists. In alphabetical order:

Glenn Lewis and Margaret Dragu were in audience. (Maybe others from that list too, but I wouldn’t have known them.) Kate Craig passed away in 2002, so I am quite sure that she wasn’t there, though a number of women were kind of dressed like her.

How do we do tributes? Why do we re-iterate, repeat, re-imagine, remark, re-play, re-use, repeat, appropriate, re-make, re-stage… ? If we remark on something do we assign it new meaning? If we copy the motions –practice them with our limbs, do we become the past for a moment, or do we ingest them and then finally change their meanings? Who authors the past, when it gets repeated? Derrida said that the original use should not be prioritized over the secondary. In the late 60s Foucault predicted that by now we would be over the author-thing.

Curtis Grahauer’s empty stage was funny. Even though it was a karaoke invitation – the mikes, the music and the words were all in place for us to play and sing along—no one dared to touch the setup, which was meant to exactly mimic the placement of the 8 band members as they were posed on their album cover. The absent rock band. Is anyone counting, how many local tributes have been turned down by the most famed of that crew? (OK forget about them. No one wants to sing along with them anyway.)

Ron Tran’s Peanut, Leopard, Sharks miniaturized the most familiar of performance art props from Vancouver’s early performance art days and put them into the hands and onto the bodies of a pack of preschoolers who were let loose in the gallery for the first couple of hours of the evening. Yes, performance art was a preschooler in Vancouver when these characters were first running and swimming around in circles. The original artists had ridiculous aspirations of taking over the city and the world. (I can imagine them falling down from laughing so hard, just like those kids.) In some ways, Vancouver art has lived up to their impossible international ambitions, of which this show is a reminder. But the reiteration of these works on the bodies of really tiny kids also puts those antics into a kind of disappointing contrast with all of the really smart and serious, institutionally bound, art that gets internationally distributed these days. Only preschoolers have fun now?

Both Raymond Boisjoly and Francisco-Fernado Granados produced performances by themselves, in front of us, and in response to more senior artists who had also performed at this year’s LIVE. Boisjoy made a simple drawing that spoke back to the overall work of Warren Arcan who had performed Why I am So Beautiful a week earlier in the same venue (VIVO Media Arts Centre). Boisjoly and I talked about Arcan’s particular interest in using worn and familiar materials to work out fantastically intense psychological meanings. In Why I am So Beautiful Arcan used every objects from his mysterious box to speak variations of that beautifully twisted scenario of the love affair. It is complicated, the love affair. The third or the forth or the fifth love affair. First with a stone, then a stuffed bear… then on the phone. Complex, yet comfortable in its familiarity, and increasingly uneasy.

That is only one reading of Boisjoly’s simple gesture of using a beer can to scratch the text,

UNEASY WITH
THE COMFORT
OF COMPLEXITY

onto the gallery wall while everyone partied.

When I read it after he had finished, I was thinking that if the artist knew how many times I uttered the words “its complicated” to newcomers to Canada who didn’t understand things like the government’s abysmal record of unfair dealings with Aboriginal Peoples, he would be uneasy. What do those uneasy words mean?: I can’t take the time to explain that issue to you…or I don’t know the answer but I can’t admit that I don’t know…or I cannot speak….?

Francisco-Fernado Granados’ work was a direct appropriation of a previously performed work by Margaret Dragu. Like a piece of sampled music, he took the smallest of elements from her Western Front performance that is briefly captured here (http://www.livebiennale.ca/1999-2001.html – watch for the tiny clip of Dragu leaving a kiss mark) and repeated it until the surface that he worked against ran out. This work solidified the way that live art was inserted into the gallery form, seemingly a curatorial intention of the re-LIVE Vancouver event. Granados himself has been inserting his intense physical gestures into gallery settings as a way of marking the space with his slowly moving body. His body has been leaving its mark on these revered spaces with materials that belong more on the surface of paper rather than on the body: a red marker in this work, untitled (spatial profiling), or gold gilt (gold in his work is a recurring mark for mourning –of gold mine victims in Guatemala and of a lost lover) as in the recentCrown performance and installation at the Queen Elizabeth Theatre in Vancouver. Margaret Dragu’s participation in Chaos a day earlier for LIVE in the courtyard behind the Firehall Arts Centre was much less about imprinting the body on a cultural or exhibition space, than about working through an evolving series of gestures and materials in a socially evolving context. During Chaos, the audience came and went as four women performers, Sinead O’Donnell, Judith Price, Grace Salez and Margaret Dragu, invented relations with each other, the space and the materials that they had gathered. This was one of those largely generous events during which the audience could ingest a repertoire of actions and reactions that held uncanny fascination and imaginative potential. From a long practice of making those generous Aktions available for her audiences, Dragu’s single kiss mark on the white wall (1999?) was the action that Granados chose to reiterate and practice until he was stained and probably a little sore.

Thank you LIVE 2011 for marking up the city again with new and renewed actions, gestures, forms, poems, songs, texts, uncanny relations…. in such a large and generous display.