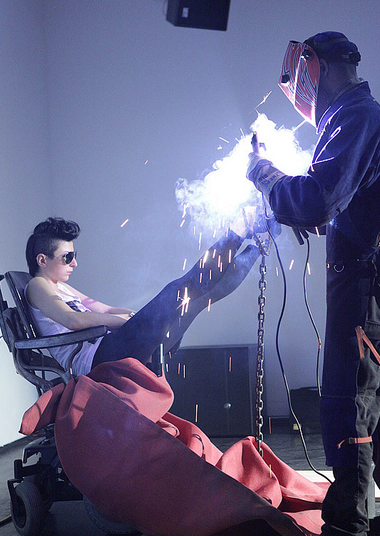 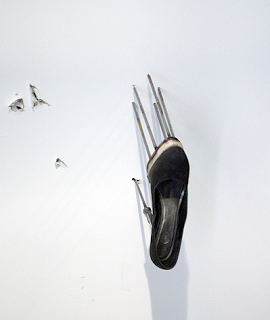 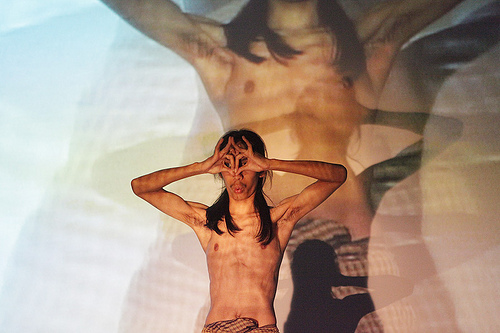 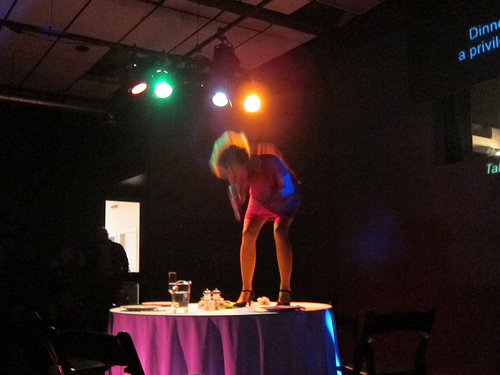 At the end of the evening, one of Anna Syczewska’s high-heeled shoes, the ones with the 10-inch spikes welded to their soles, remained impaled in the wall. The other lay at the base of the wall where it fell, under the gouged drywall. Her electric wheelchair stood empty, its wheels covered in crushed tomato, the result of its passage over the pile of rotten tomatoes. The tech team had put away the arc-welding equipment and the homemade gynecological stirrups that had held her feet as the professional welded the spikes to the soles of her shoes.

Nothing much clears a room quite as effectively as a 45-minute session of electric arc welding in an enclosed space. The blinding light, the noxious fumes, and the bludgeoning soundtrack pushed the majority of the audience back into the bar or onto the street for some fresh air. Syczewska in her sunglasses sat impassively in her wheelchair tippling from a wine bottle waiting for the slow industrial process to finish.

By the time the spikes on both shoes had been welded in place, it was evident that she had trouble moving her legs. They had remained splayed apart, held in place in her stirrups which would have looked right at home in a clinic run by motor-heads. It was constructed out of three lengths of welded chain, which formed the “Y” and a couple of pieces of bent re-bar that held her feet.

Once the welder completed his painstaking work, the crowd re-entered the gallery space and the show entered another phase. Syczewska stood upright momentarily with the modified shoes. As she balanced precariously, she rubbed a tomato over her legs. Unable to maintain the pose, she collapsed back into the motorized chair.

She maneuvered her chair back away from the audience. Motioning with her hands, she indicated to us that she wanted a path cleared in the rows of chairs. As a way parted in front of her, she revved the chair and moving forward at speed she hit the wall. One shoe remains impaled to this day.

Moe Satt from Yangor Myanmar, presented a simple understated piece. His set consisted of a chair set before a screen. A camera captured both he and the set, and it its image on the screen behind Satt. The positioning of the camera and the video projector were such that it created an infinite repetition of images of Satt on screen, similar to the infinite series of images created by two facing mirrors. In this video version however, the images grew rather than decreasing in size and only the first couple of iterations were visible.

Satt began the show by removing his jacket and shirt. Bare-chested he adjusted the wrap covering his legs, taking care to tie it, in what I imagined to be the traditional manner. Having tied it at the waist he then gathered it up and tied it again to that it covered his genitals and buttocks leaving his legs bare.

He continued by making a number of stylized and symmetric gestures with his hands, positioning them over his eyes, on his face, or over his head. In the audience, we saw these in flesh and blood, as a black shadow projected on to the screen and in the cascading series of video images projected on the screen behind him.

Walking up to the audience he indicated that certain members should mimic him. Satt accompanied these gestures with a whistling of single tones.

At a certain moment, Satt closed the action by walking to the back of the stage, kneeling and bowing.

In analysis Freud spoke of the screen memory. This was a memory, which served to protect the ego from the effects of trauma. It accomplished this by covering the memory of the original trauma with the memory of something else, usually another anodyne event. During analysis the analysand, would return to this harmless memory and to a certain extent this screen memory would come to stand in for original difficult and painful memory.

Anne-Sophie Turion piece recounted a series of childhood memories; a car drive around a lake with the family, a the fragment of a conversation on a telephone, the music her father played on their car drives, the banal exchanges at the family supper table.

The piece began at dinner table set for a party of seven. On the wall behind the set, the Turion’s text and simple stage directions were projected onto the wall. In her halting English, Turion began by telling us that she wished to share a memory with us, but that it was difficult to find the precise memory.

This opened the way to her fragmentary, repetitive and partial description of a number of childhood memories. Interspersed with her narrative she presented the lush musical excerpts that her father enjoyed listening to in some distant past. These included the theme music from the film Jurassic Park, David Bowie, the Doors, and the Hall of the Mountain King.

We never learn of the hidden trauma, or indeed if there were such a thing. There are repeated mentions of her brother and mother but everything is banal to an extreme.
The piece climaxes with Turion climbing up onto the dinner table to lip-sing a song, one of her father’s greatest hits.

It ends as it began with the table reset for seven and Turion repeating her introductory phrases.

We are caught in a neurotic return; never capable of escape from the terrible gravities of a childhood we can never fully recognize and never escape.