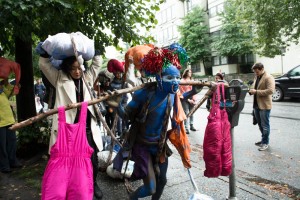 During the concluding day of the 2013 LIVE I accepted a mid-performance invitation of Nigerian Artist Jelili Atiku to join a handful of other volunteers in a shuffling and rainy trajectory through the heart of the Downtown Eastside (DTES) by way of Hastings Street. Pulled by tethers formed from long strips of ripped fabric haphazardly attached to heavy packages of wet clothing that the artist had balanced on the tops of our heads, the procession became arduous.

We were “elements” according to a text written onto poster-sized paper, and we were tasked with helping the artist to transport the soggy bundles from the Oppenheimer Park totem pole (1997) to the Victory Square Cenotaph (1924). With both monuments, each about 30’ in height, serving as local memorials, the procession carried elements of mourning. The totem “is meant to represent all those who have died in the Downtown Eastside and give strength to those left behind”, and the cenotaph has been the site of the city’s annual Remembrance Day ceremonies since the end of World War 1.

But the event seemed to present to the street much less familiar and even exotic elements: a small man completely adorned in blue paint (perhaps read as Yves Klein blue by some of the performance art audience), a metallic wig and an impossibly large nose ring. I wondered if the mini-spectacle that we formed could have also been read as an obscure echo to a more legible march earlier the same day. In the morning thousands of people had joined the Walk for Reconciliation: A New Way Forward, a concluding event to Vancouver’s hosting of the National Truth and Reconciliation Commission. The week-long commission had ceremonially entered into a national registry local testimonies from those who had experienced first-hand abuse or the generational and systematic injustices resulting from Canada’s Indian residential schools system (1840s to 1996).

In contrast to the TRC march that could be understood as a coherent and definitive street performance, Atiku’s small procession posed only a minor disruption to the usual operations of Hastings Street. As we dodged the familiar commotion, we elements fielded widely ranging questions from passersby: “What is going on?” “What is this for?” “How long has the blue guy lived here?” (the last comment recounted by R. Gledhill later in an email). And more defensively: “There are poor people where you live too!” “This is not at all cool: these people here are already really suffering!” The quick judgments of those we passed stayed with me as I tried to make sense of prodding, heavily laden and labouring participation.

LIVE has developed a tradition of situating performance art in the DTES. During the 2011 festival, one of the evenings called the Drag, was a tour of the emergent artist-run spaces in the region between 221A on East Georgia and Pigeon Park. I wrote then that the situation of art production within the most economically impoverished, yet politically charged neighbourhood in Canada resulted in a raucous duel—a kind of “poetry battle”. La Pomeña, an Argentinian folk song sung by artist Guadelupe Martinez in a landscape-responsive performance provided me with an understanding of how a geography, whether physically unique as a Patagonian landscape or socioeconomically challenged as in the streets and buildings of the DTES, gets implicated in contradictory and competing creative appeals (see – Poetry Battles – The Drag).

Before Atiku’s performance, at the Dunlevy Snack Bar noon hour artists’ talks, Andrea Pagnes from the duo VestAndPage described how his days spent walking the streets surrounding their accommodations in the Patricia Hotel were a gift that allowed Pagnes to recall his own precarious histories, and to recognize the innovation and determination of street people. He described how VestAndPage’s performance at VIVO Media Arts the night before had been heavily indebted to his short time in this unique locale.

Pagnes’s gratitude contrasts in my mind with a memorable 2011 artist talk by the Seoul based duo, YOUNG-HAE CHANG HEAVY INDUSTRIES, who were uncompromising in their evaluation of the region: “THE DOWNTOWN EASTSIDE IS THE MOST SHOCKING NEIGHBOURHOOD WE’VE EVER BEEN. IT’S THE MOST SHOCKING NEIGHBOURHOOD WE’VE EVER WALKED OR TAKEN A BUS THROUGH. WE’RE SHOCKED…” I’m quoting this from a work composed during their residency at Centre A. (NOTES ON THE DOWNTOWN EASTSIDE from their East Vancouver Trilogy is available here.) NOTES goes on to describe a tragic experience that the artists encountered while traveling from the Patricia Hotel to Centre A for their opening. On what is recognizable as “Welfare Wednesday” a police barricade necessitated by the tragedy of a woman’s death from being pushed out of a sixth floor window onto the street, stops the visiting artists in their tracks. Later, in concluding talk after NOTES was presented, the artists insisted that Vancouver curators needed to make the conditions of working within and about the DTES very clear to visiting artists. I personally recall feeling that the reflexivity of YOUNG-HAE CHANG HEAVY INDUSTRIES had challenged all of us to more clearly articulate our own terms of engagement for work in the DTES.

Some hours after Atiku’s performance we were back in the DTES, this time at SFU Woodward’s Fei and Milton Wong Experimental Theatre for LIVE’s only ticketed theatre event. Marcel Duchamp, by curator Guillaume Désanges and performed by Frédéric Cherbœuf, offered a cursory review of Marcel Duchamp’s most celebrated achievements through projected images and videos and an entertaining monologue. A musical theatre for (or about) art school, the play seemed to be sampling of undergraduate art history textbook pictures and video clips, reiterating and reiterating, not the art but the most tired representations. Not an academic class, and not really live art, this play displayed the writers’ relationship to contemporary art iconography.

I owe that analysis entirely to Désanges’s intriguing lecture presented a day later at the Western Front. There I learned that Marcel Duchamp was one method in a repertoire of curatorial strategies that Désanges had developed for handling iconographic moments in contemporary art, particularly performance art. He summed up these curatorial strategies as “burlesque” practices. By this he meant that through them he was working “without respect but with love”. He was allowing his adoration for the artworks—in most cases artworks that are known to him only through excessively circulated gestures and stories which ubiquitously stand in for the art works—to drive his curatorial impulse. So in works like Child’s Play (2008), he engaged a group of seven-year-old children in a vigorous performance art workshop in which they learned the isolated gestures that represent landmark achievements in body art. The resulting documentation includes stills of children frozen in cross-limbed self-biting (Vito Aconchi’s Trademarks, 1970) or dragging red paint across a sheet of paper (Ana Mendiata’s Body Tracks, 1974). Marcel Duchamp employed similar burlesque strategies in the way the bland black and white projections of Fountain (1917) and a Bottle Rack prop supported choreographed musical numbers intoning Duchamp as “… the freest man of the 20th century. Because he made this fundamental liberty flourish, he would feed it, all the time, with every breath, every gesture.”

One audience member at Désanges’s talk argued that the “loving” burlesque position, whether curation or otherwise, is non-consensual and thus ethically compromised. Yes, our continual re-authoring of ideas, as well as places and times, is rarely produced with the clean and clear and informed consent of the players, in the way that YOUNG-HAE CHANG HEAVY INDUSTRIES might have wished for the artists working in the neighbourhood surrounding Centre A in 2011. The cool samplings of the dead authors’ works in Désanges’s loving tributes are humbling and even embarrassing in the way they reveal the weak (nearly dead) material basis for our adoration of iconic moments in performance art.

Lois Klassen is a Vancouver-based artist and writer. She is a new member of the LIVE Board of Directors.