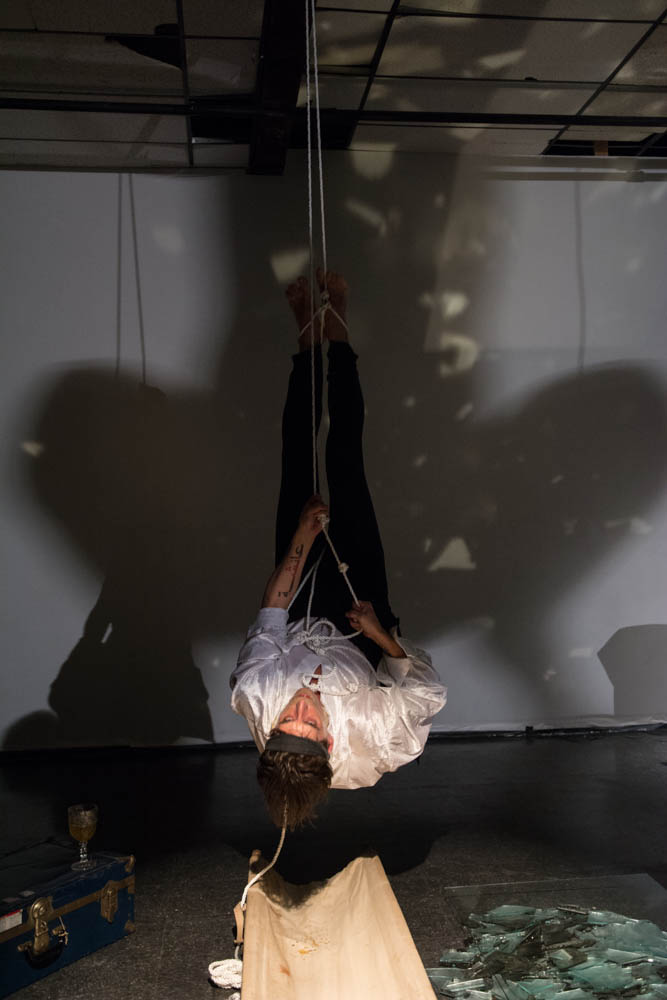 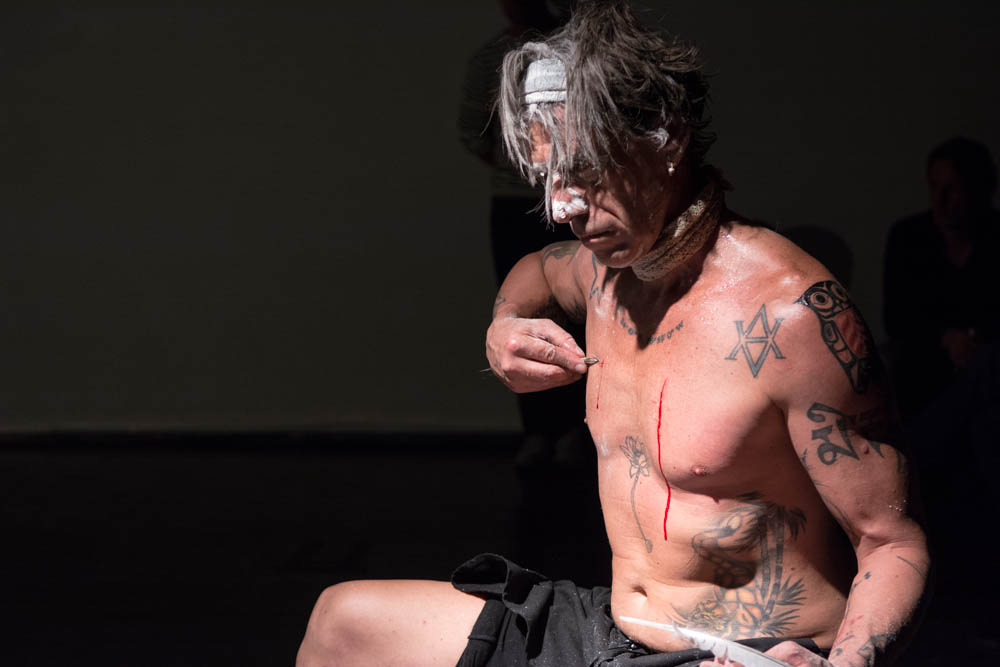 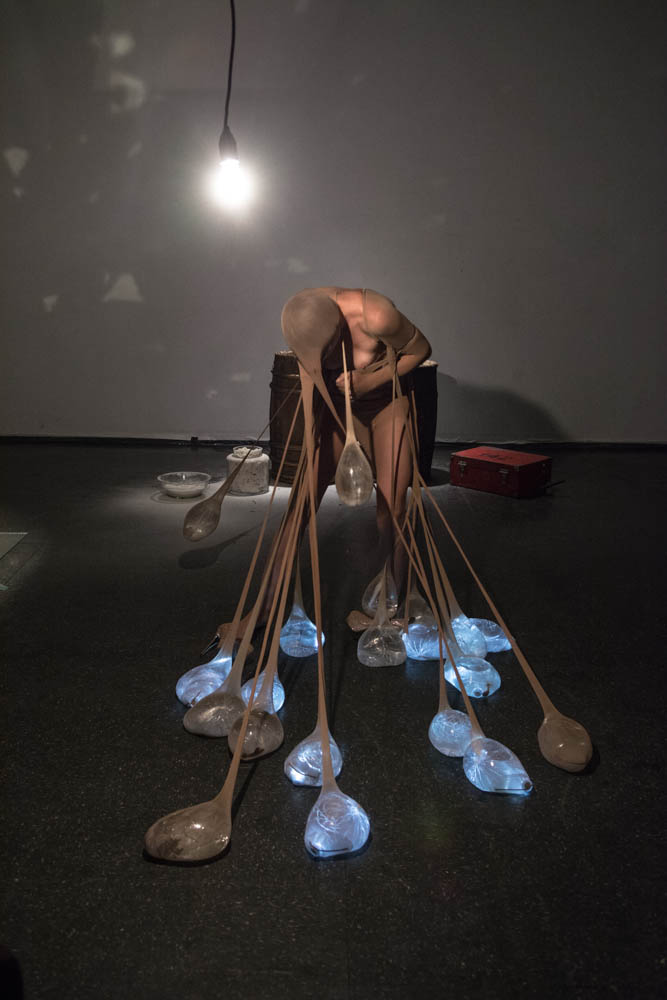 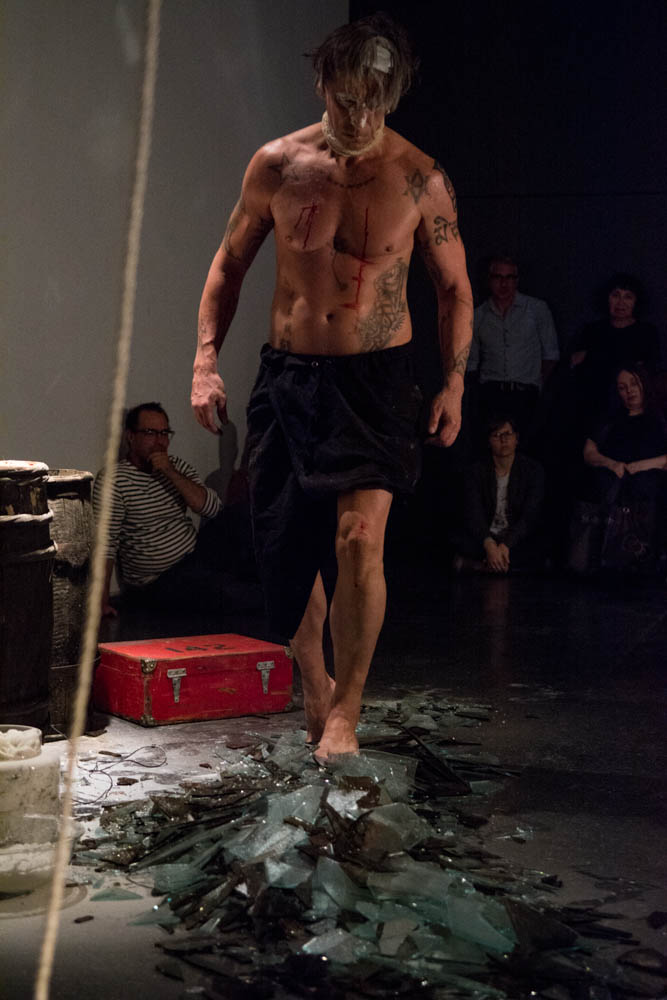 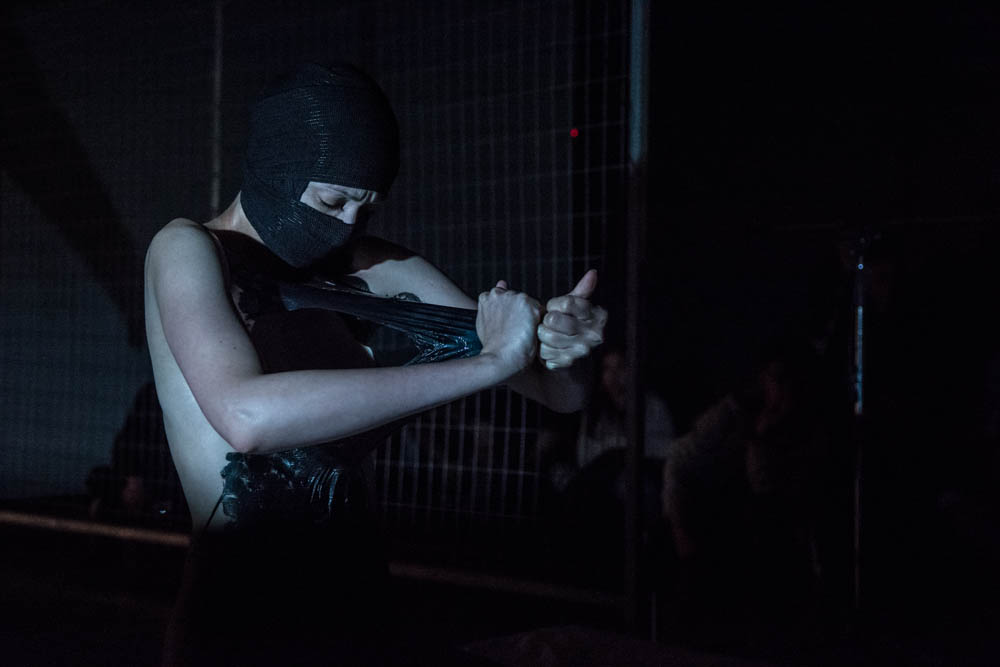 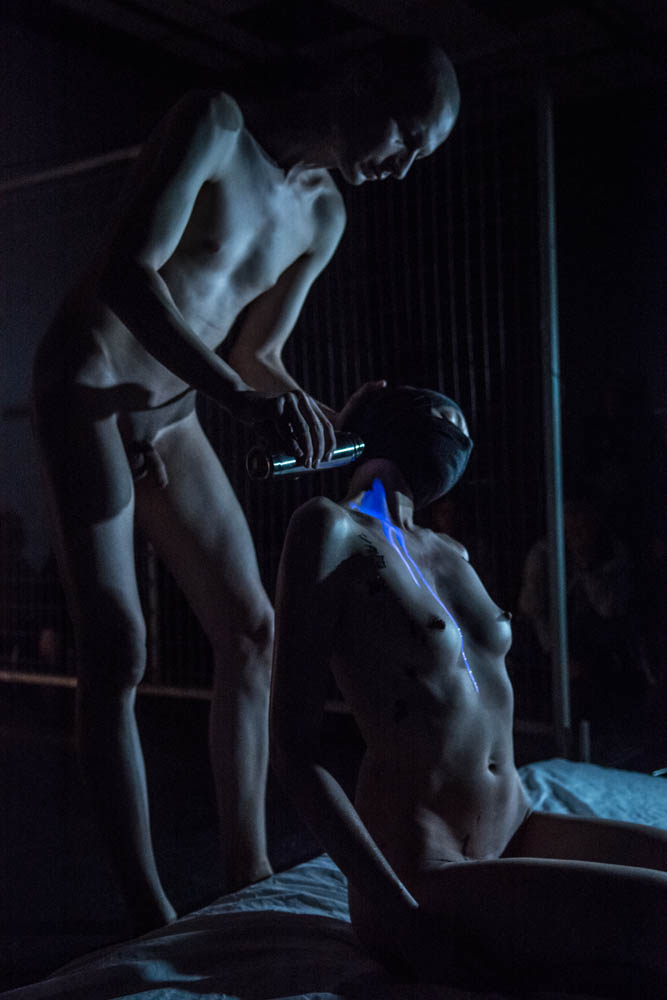 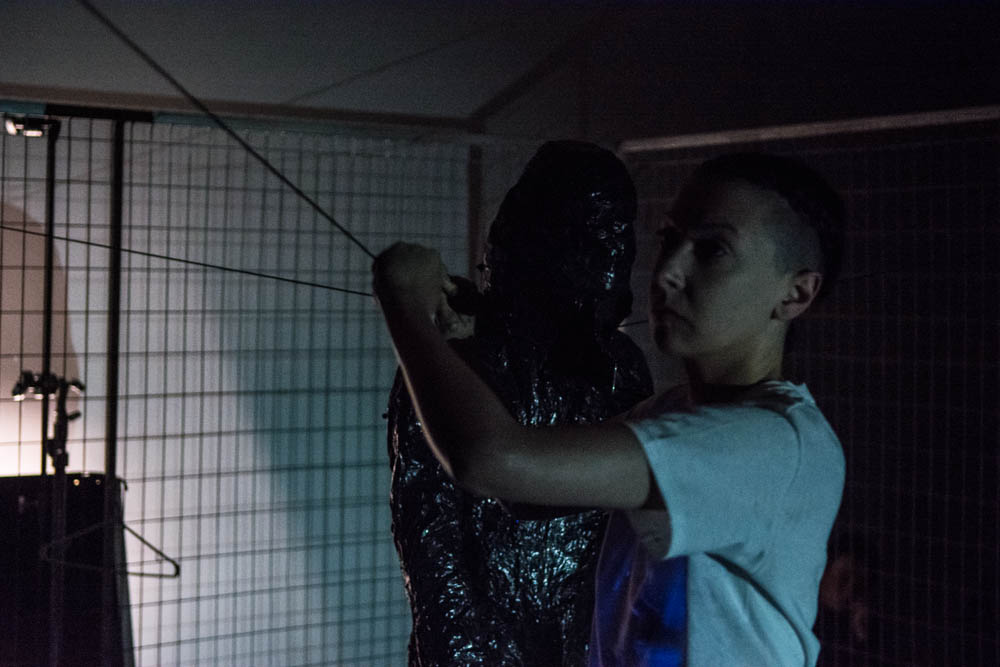 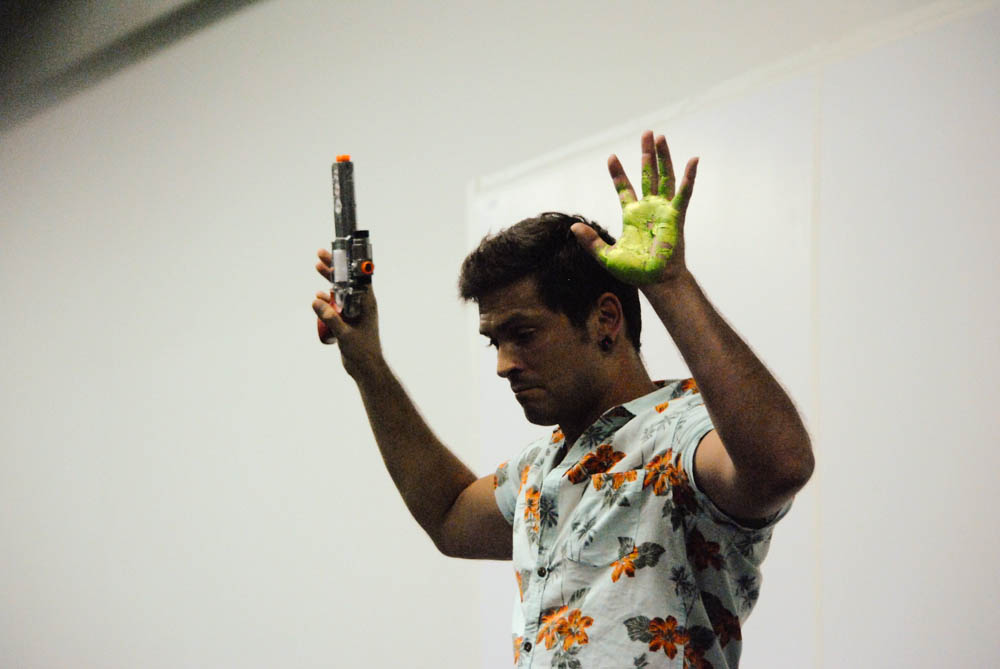 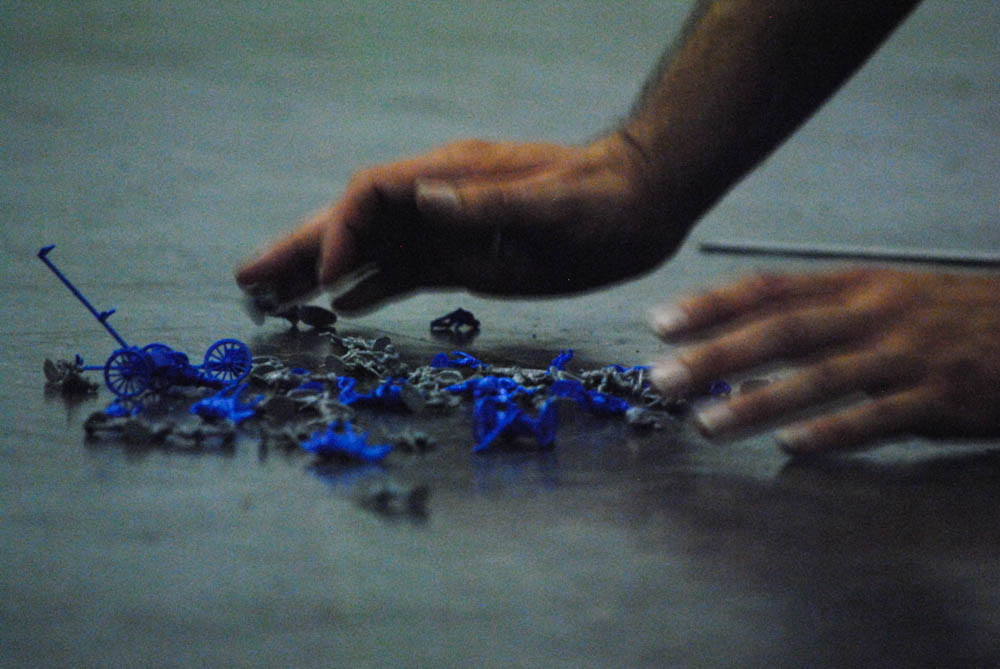 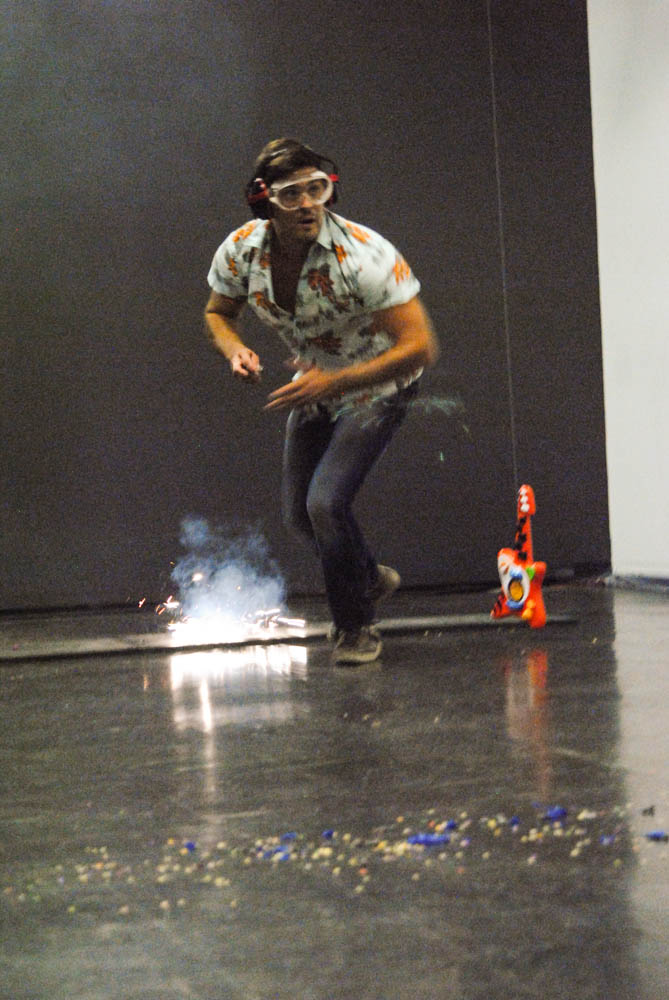 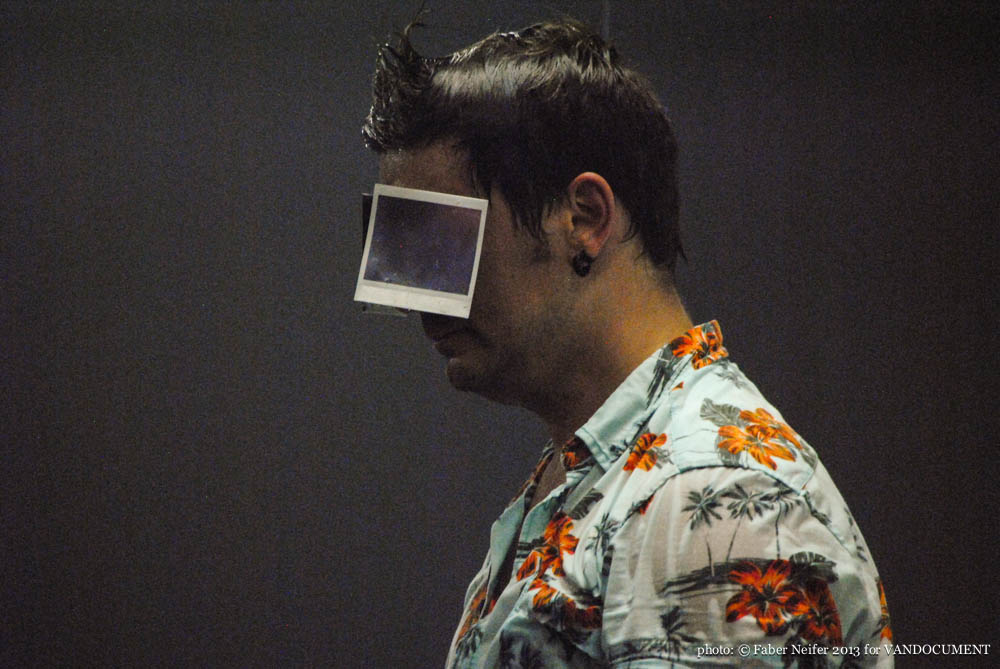 Finally you have arrived at the table. The table makes a good noise that could be defined as a “hellish jangling”. It is a special place. Climb up on it, or stab it with your knife. Pour booze and drip paint on it and rub it all over. Hack the stool off your foot. You can still use it as you move across the room like a grotesque inchworm, grinding glass into the floor as you go along.

It is the end. You may sit at the table now, both feet firmly on the ground. But you can also stand on it, bleeding and gasping, while hacking off a table leg with your big scary knife. Best of all, you can just throw the table across the room. Yes, that would be best.

It takes a whole lot of work and a lot of smarts to make yourself look like a fool. I am terrified. Good job, Arti!

It looks like the beginning of a magic show. Black velvety curtains surround an immaculate white plinth, on top of which rests a voluminous glass fish bowl. Pancho emerges, looking a bit like a game show host: red tie, white shirt, and black pants. Some game show-type music comes on the sound system. A water bottle emerges from behind the plinth, he takes a sip.

The show begins. One after another, Coca-Cola bottles emerge from behind the plinth, are opened and emptied into the fishbowl. Empty bottles are neatly lined up in front of the plinth, labels facing forward, and bottle caps are placed on top with equal precision. Lopez is just pouring Coke into a glass bowl, but there is something hilarious about the whole debacle. As yet another bottle appears from behind the plinth, you just have to laugh. Maybe it’s the samba covers of “Smooth Operator” and Prince’s “Kiss” that animate the performance. Maybe it’s the way in which Lopez, completely straight-faced, coyly finds yet another way to pour Coke into the vessel, now over the shoulder, now two at once.

Twenty bottles of Coke transforms the fishbowl into an enigmatic black orb with a pulsing meniscus, threatening to spill at any moment. Twenty-one sends the liquid fizzing over the glass, spilling over the edges of the plinth and onto the floor. Lopez takes a break, pointedly finishing his bottled water as he surveys the squandered bottles of Coke. The final bars of “Smooth Operator” play out. On the last beat of the song, he pulls a baseball bat out of nowhere like a rabbit from a hat and smashes it into the black globe. Glass shards and Coke spatter everywhere. In the heat of the moment, someone throws a chair, barely missing LIVE’s director, Randy Gledhill. Brilliant. It was the last instant of Pancho Lopez’s piece Friday night that transformed it from a banal repetitive action to a powerful act of gratuitous poetry. Without that moment when the baseball bat slammed into the overflowing glass vase of Coca-Cola, shattering it into countless pieces sending umpteen liters of coke spilling onto the gallery floor, what would the performance have been?

A man pours liters of coke into a clear glass vase. He arranges the empty bottles in a line and carefully places the red plastic bottle caps along the front edge of the white plinth where the vase sits. Canned music forms the soundtrack. If Lopez had stopped his action before he had filled the vase, taking his bow and walking off stage, I would be writing this post about his commentary on consumption and branding in a modern capitalist society, or perhaps about the ironic and playful gestures he used as he filled the vase with the ugly brown liquid.

At the conclusion of such a hypothetical truncated spectacle, we would have applauded the work nonetheless. If we felt any lingering insatisfaction, we would have attributed it to our incapacity to understand the work’s deeper meanings.

Certainly, the simple act of filling the vase with coke meant something. If we couldn’t we see what it really meant, the cause of our uncertainty would certainly have been our own blindness, our own incapacity to see.

Thankfully, Lopez concluded his piece with an act of irrevocable finality. We no longer need to search for a rational set of meanings to invest within the piece, to explain it or contextualize it, because the beauty and completeness of his act overwhelms those considerations.

Speculations become superfluous and absurd confronted with the poetic act. Of course, its nice to pass the time talking about this and that in relation to a work of performance, but one hopes that during an evening the crystal palace of our rationality will be, for one instant, smashed as an incomprehensible beauty that seizes us by the throat reminding us that life is always something greater than our capacity to understand.

That said, even after such acts of gratuitous poetry, the tech crew still has to come clean up the sticky mess.