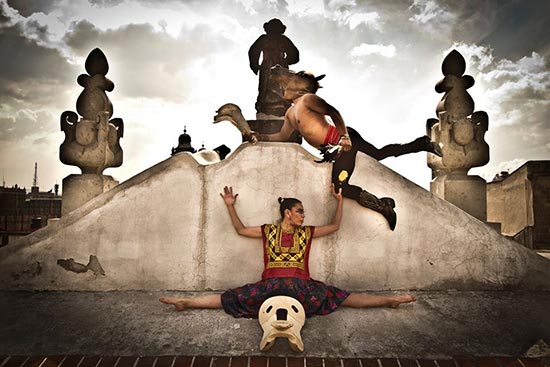 La Pocha Nostra is a trans-disciplinary arts organization that provides a support network and forum for artists of various disciplines, generations and ethnic backgrounds. La Pocha is devoted to erasing the borders between art and politics, art practice and theory, artist and spectator. La Pocha Nostra has intensely focused on the notion of collaboration across national borders, race, gender and generations as an act of radical citizen diplomacy and as a means to create “ephemeral communities” of rebel artists. Every year, La Pocha conducts a summer and a winter performance art school in which Pocha’s radical pedagogy (a performance ‘methodology that has been developed during the last 10 years) is shared with a group of radical artists. The site for this pedagogical adventures changes every year.

Guillermo Gómez-Peña is a performance artist, writer, activist, radical pedagogue and director of the performance troupe La Pocha Nostra. Born in Mexico City, he moved to the US in 1978. His performance work and 10 books have contributed to the debates on cultural diversity, border culture and US-Mexico relations. His art work has been presented at over eight hundred venues across the US, Canada, Latin America, Europe, Russia, South Africa and Australia. A MacArthur Fellow, Bessie and American Book Award winner, he is a regular contributor for newspapers and magazines in the US, Mexico, and Europe and a contributing editor to The Drama Review (NYU-MIT). Gómez-Peña is a Senior Fellow in the Hemispheric Institute Institute of performance and Politics, a Patron for the London-based Live Art Development Agency and in 2012 he was named Samuel Hoi Fellow by USA Artists.

Since 1994, Michèle‘s work with La Pocha deals with identity, place, gender politics and the aging body. As a Ballerina, Michèle experienced stereotyping in the roles she was offered over her international career, and so from 1992-2013 she founded and directed Opendance, a 501 c(3) non-profit community based dance arts and educational outreach company based in Phoenix, AZ. Opendance worked with all types of people, and offered free or reduced rate dance and interdisciplinary based classes for the community.

Michèle continues to teach for all ages, choreograph and perform and was nominated in 2014 for an AriZoni Award for choreography. Identity and place has been a base for Michele’s work, who is also known as Michelle Ceballos and Michel Cote.

Dani d’Emilia is an Italo-Brazilian performance artist and pedagogue working internationally across performance, theatre and visual art projects. She is a co-founder of the immersive theatre company Living Structures (London, UK) and the multidisciplinary arts space Roundabout.lx (Lisbon, PT). In 2008 she began collaborating with La Pocha Nostra and joined the troupe as a core member in 2011. Her performance work focuses on searching for embodied practices of resistance and decolonisation. She explores physicality and identity as a constant process of becoming, combining artistic strategies with discourses stemming from transfeminism, queer theory, decolonial critique and social movements. Dani began her theatre studies in Brasil and later furthered her training at the Desmond Jones School of Mime and Physical Theatre and Dartington College of Arts (UK) , where she graduated with a BA in Theatre and Performance Practice. She is currently studying and teaching in PEI (MA Independent Studies Program), directed by Beatriz Preciado in MACBA (Barcelona Museum of Contemporary Art, Barcelona). Dani has taught workshops and presented work in Brazil, Colombia, Mexico, Curaçao, USA, Italy, Portugal, United Kingdom, Greece, Poland, Spain, Slovenia, Croatia, Germany, Canada and Costa Rica.

Saul Garcia-Lopez is a performance artist, radical director and a PhD candidate in Theatre and Performance Studies. As a scholar and artist he explores the pedagogical intersections of acting and performance theory and practice, indigenous strategies of performance, ethnicity, gender, post-coloniality, indigeneity and chicano and border art. His artistic work is body, text and multidisciplinary based and aims to dislocate/challenge assumptions of cultural representations by embodying simultaneous and contradictory identities and actions. As part of his professional development, Garcia-Lopez trained as a contemporary dancer and actor, and as a psychologist at the National University in Mexico. He also completed a Post Graduate Diploma in Directing at VCA, Melbourne University, Australia, and a Drama and Film Honors Degree at WITS University, South Africa. He has presented his work in Australia, UK, West Europe, South Africa and the Americas. He is co-editor of the Almanac of Live Art, board member of the Toronto Free Gallery, teacher at the Centre for Indigenous Theatre in Toronto, and Core Member of La Pocha Nostra.

Daniel Chávez is a multi-mestiza of Afro/European/Cherokee/Latino (South American) heritage, transgender identified, multi-disciplinary artist-scholar-activist-pedagogue. They are currently based in Chiapas, México. Brittany trained in classical ballet and modern dance for sixteen years at the former School of San Jose Cleveland Ballet under the direction of Dennis Nahat and at Walnut Hill School of the Arts under the direction of Michael Owen. They received a BA in Latin American Studies, an MA in Theatre Arts, a K-8 teaching credential and is currently pursuing their doctorate in communication studies (performance studies) at the University of North Carolina at Chapel Hill. Brittany’s solo performance work focuses on gendered violence in the Americas, queer Latina/o migration, trans politics, and the queer body. They have performed and presented throughout México, as well as: Brazil, Greece, the Netherlands, Colombia, and Canada. Brittany joined La Pocha Nostra as a full member in January of 2014.